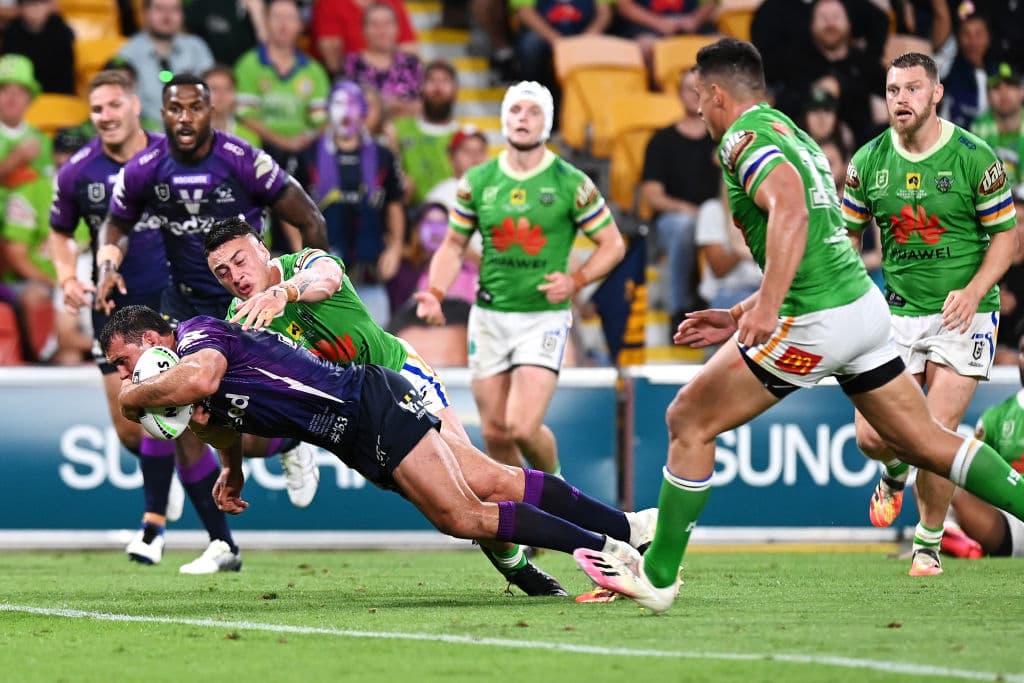 Raiders season over after early Storm

The Canberra Raiders premiership dream has ended with an emphatic 30-10 loss to the Melbourne Storm at Suncorp Stadium on Friday night.

The Raiders were never in the contest as the Storm scored three tries in the opening 10 minutes to book a spot in their fourth Grand Final in five years.

The Raiders couldn’t match the early intensity they showed last week against the Roosters and conceded the first try after 4 minutes with Jesse Bromwich crashing over from short range.

The Storm had their second try in the next set after a Jordan Rapana mistake in defence saw Josh Add-Carr race away down the wing before passing back to Ryan Papenhuyzen to score next to the posts and give the Storm a 12-0 lead.

The onslaught continued with Suliasi Vunivalu brushing past some soft Raiders defence to score their third try and give the Storm a 16-0 after just 10 minutes.

Perhaps they were still feeling the effects from last week’s tough game against the Roosters, or perhaps they were lethargic from just jumping off the plane. Whatever it was, the Raiders simply had no answer for this ruthless Storm side.

Cameron Smith added a penalty goal in the 15th minute before Justin Olam pounced on a Nick Cotric mistake in the in-goal area to extend the lead to 24-0 after 24 minutes.

Cotric managed to get the Raiders on the board in the 29th minute to give them a glimmer of hope but it was a long way back from 24-6 down at half time.

The Raiders started the second half by driving Dale Finucane 15 metres back into the in-goal area and it looked like their may be some life in the Green Machine. However, they came up with a simple error which seemed to take the air out of the match.

The Storm are such a professional outfit and despite the Raiders having a few opportunities to close the gap, they kept coming up with big defensive plays and had the game well and truly wrapped up with 20 minutes to go.

Finucane put the icing on the cake after regathering a kick to put the ball down and send the Storm into the Grand Final once again.

Cotric added a consolation try in his final game for the Raiders to bring the score to 30-10 and close the curtains on the Raiders 2020 season.

It was also John Bateman’s last game in the NRL as he heads back to England to play for Wigan. Corey Harawira-Naera will slot straight in for Bateman in the second row, while Bailey Simonsson will likely take Cotric’s spot on the wing.

The disappointment was clear on the face of Ricky Stuart as he spoke briefly to the media, saying he was proud of where the team got to, but that the opening 25 minutes was

“We were passive in defence (in first 25 minutes) … it was not us,” Stuart said.

“I can handle the loss … but I’m just really disappointed we did not have one of our better games.”

Stuart even dipped his hat to Melbourne as he expanded on the opening question.

“To our character and the resilience in the team, we hung around and tried to turn it around but Melbourne just wouldn’t let us and it made it a tough night,” he said.

“I’m very proud of where we got to but I’m disappointed in not going one step further.

“You can’t take it for granted getting to this position in a season because you fight so hard to get here and put so much work to get to this stage of the season. For us to let ourselves down like that in the first 25 minutes is the disappointing part.”

He added: “I genuinely wish (Storm coach) Craig (Bellamy), (captain) Cameron (Smith) and the team all the best for next week.”

The Storm will face the Penrith Panthers in the Grand Final at ANZ Stadium on Sunday evening, 25 October.